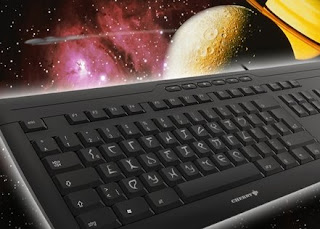 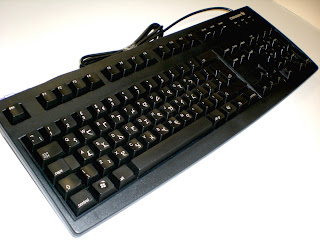 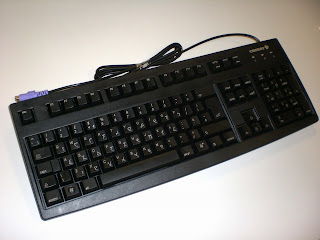 Not too long ago, Twitter was on fire with news of a Klingon keyboard.
I read *multiple* tech reviews on the item, each of them with the current date.

I was thrilled. Finally, after years of waiting, it was here.
I've been wanting a Klingon keyboard since 2002. At one point I even covered the keys on my laptop with stickers that I had written pIqaD characters on.

I was just about to pull out my bank card and head on over to the Cherry Keyboards site when I decided to find a picture.

Boy was I glad that I did.

I don't know which order the images ended up in, but I found a keyboard with a space background.
After close examination of the keys, I realized that THEY WERE WRONG!
How could they do this to me? I realize that I'm a niche market. I don't expect too many items, but I do expect the items to be worth buying.

So I left a rather wordy and angry comment on a product review site and then used the "Contact Us" feature of the Cherry site to send them a rather harsh letter.

*After* I sent the message, I was informed that the keyboards came out in 2007.

Which would explain why the keyboard wasn't USB.

I was shocked when I got an e-mail from Robin Bithrey,
Technical Support Engineer - Keyboards.

I don't have a copy of my rant, but this is her reply:

With reference to your mail sent through the 'Cherrykeyboardsrus' website.

I'm certainly interested to see where this has all gone wrong with the
layout. We researched the internet before producing this keyboard and
from what we could see, this was the layout used for pIqaD, so I'm not
sure where it's all fallen down...

Unfortunately, the keyboard hasn't been particularly popular and was
originally announced simply as a marketing exercise, but after we
received a few enquiries for them, we decided to go ahead and make
them. Because of the manufacturing processes we use, it's not possible
to make small quantities and we had to order 65pcs to bring them over
to fulfil orders for just a handful - because of this, it's therefore
doubtful that we'll manufacture these again - unless we receive a
large order for them that is!

I hope this is useful. If you have any further questions and can give
us an indication as to where the errors are in the layout, please do
not hesitate to contact me.

Robin.
-----------
Wow, they wrote me about an old product. Cool. And they asked me to write back, so I did.
I felt the need to explain myself. Why am I suddenly tearing apart their product after all this time.

A couple of days ago, I read 2 reviews for the Klingon ketboard before ending up on your site. These were NEW reviews with the current date. I didn't find out that they keyboard was old news until after I wrote you.
I have seen countless other reviews, and the social network, Twitter has been on fire with news of your product.
The internet has rediscovered you.

I note that the site lables the image as a "mock up". This also helps it feel new.
I wrote you, hoping, to prevent this mock up from being the final product. I had no idea it went on sale back in 2007.

The picture isn't much to work with. It's at an angle and doesn't show all the keys.After looking it over with other Klingonists, we're wondering if it is based on the German mapping instead of the American mapping. The placement of the "y" for example.

Start with the standard American QWERTY keyboard. Then put the obvious characters on.
The rest map as so:
ch-c
gh-g
ng-f
q-k
Q-q
tlh-x
'-'
This leaves the 'z' key blank. It's used to mke the Klingon "logo".

The picture doesn't show Klingon numbers, the Klingons have 0-9 and the mapping is simple.

We then get into the problem of all those other keys. I'm typing on a Palm Centro, so I can't think of what they are.
Since a Klingon keyboard will purchased by both American and non-American customers, it would be best to stick with pictograms, or language neutral lables.
As an international keyboard company, you know more about that than I do.
Unoficially, meaning not part of the actual pIqaD, Klingonists do use < and > instead of ". Since ' is a letter, confusion is avoided.
Having those two characters might be helpful.
If you wanted translations for "escape" or "shift" and the like, that would take a little more effort, but certainly be possible. The folks over at the Klingon Language Institute (myself included) would be glad to help.

I hope I have made sense, and that this helped. If you have a non-mock up picture, I'd love to see that too.

I also hope that the recent buzz around the web has ended up in some orders for you.

And the site says "in stock" is this the case? One of my friends thinks he might be able to rearange the keys himself.
-----------
I had to cut & paste that message in 160 word incraments, I'm pretty sure it survived. I might be missing a line break or two...

Apologies for the delay in getting back to you - it's been a little hectic in here following a recent trade-show and I'm ploughing through e-mails as we speak.

Thanks very much for the explanation and further info on the Klingon language. We're stuck a little at the moment with making any changes to the layout of the product, simply because of some legal issues we're checking into. This also prevents us from publicising the product any further unfortunately and we've been approached by a UK sci-fi magazine to place an advert that we can't take them up on.. During the time that this PR was released again on the Internet and through the UK newspaper, the Daily Telegraph, we've seen increased activity on Klingon related websites, we've been featured on at least two local radio stations (one here, one further to the north of England) and were even contacted by a radio station in Canada for an interview. Also, a German magazine/website has asked to feature images and a short review - a positive hive of activity surrounding nothing more sinister than a marketing idea. However, all this may be in vain, as after taking some advice from our legal department in Germany, there may be some copyright issues with the owners of the Star Trek brand and the last thing we want to do is upset anyone!! We're therefore contacting them to find out our position with this product - bearing in mind that there is no mention on the keyboard or the packaging of either Star Trek or Klingon - simply a changed part number from our perspective from what is one of our 'standard' keyboard lines. The product has been manufactured for the last 14-15 years and we've made some 30million of them in different language options. As this product is made in Germany, we have a certain flexibility for smaller production runs - to get this product made, we needed to order just 65pcs.

Ultimately, it is possible to amend any layout. We have the 'bill of materials' set up at the factory for production, so all we would need to do is inform them of the changes required and they'd be able to adjust the laser program accordingly. This is a big advantage for us with this range of keyboards - each product is made completely blank and then passed through the laser printer to literally burn the image of the letters onto the keycap. With other ranges (and products from other manufacturers), the printing process is far less flexible and more time-consuming. However, as explained, until the legalities are sorted out, we can't do a thing......

The Klingon alphabet was taken from the font available for download from the KLI site - one I simply came across whilst searching and had no prior knowledge of. Whether it is perfectly correct or not, we actually have no idea, as all I did was install the font, hit each key and relay this information to the factory, who mocked up a quick sample, which we amended slightly and then asked them to press the big button....Attached, you'll find a couple of images, which aren't brilliant, but do show the 'completed' keyboard - even through there are no Klingon numbers or punctuation on this early version. The image shown on the 'cherrykeyboardsrus.co.uk' website are simple, mock images. The keyboard shown in their picture, is our 'Stream' model and not available in Klingon (sorry - minimum order quantity for this model in language variants is some 1000pcs!). I believe that this image was either mocked by them, or it could have been by our PR company, but it's certainly not an image of the finished product.

Regarding the 'in stock' comment, it is actually quite true. Currently, we have 40pcs in stock here at Cherry UK, with a handful available at a couple of our distributors. We are selling these on our ebay shop and have been for the last couple of months or so......slow as they may be to sell, they do sell! Two of our distributors had enquiries for the keyboards following the press 'frenzy', one of which sold a small quantity to one of the UK's largest retailers, PC World (otherwise known in the business world as PCWBD or Equanet) who must have had orders - they don't order unless their customers do!

I hope this explains our position a little further and that the images show what we've actually done in a real product, instead of the mock one you've seen previously. I also hope that the layout is a little more correct!! Once the legalities are sorted, then it may be that if there are further orders from our customers, we can commission a change to the key printing, but alas, if no orders appear, then unfortunately, the Klingon keyboard will be confined to that great cloaking device in the sky.....

www.cherry.co.uk
---------------
Wow. Renewed interest indeed. Contact with Paramount? With the new movie coming up, chances of approval are high.
If Paramount gives the green light, they'll be able to unleash this thing. And they might even redesign it!
I'm on pins and needles over here.

But what about those pics? What does the REAL Klingon Keyboard look like?
My Palm doesn't like those two pics. I have not been able to study them in the detail that I would prefer.
As far as I can tell, the letter keys were the only thing "Klingon". And they appear to be correct.
Even without the number keys, I'd be tempted to buy one. But I'll wait and see what happens over the next few months first.
------------
I would just like to toot my own horn and say that this post was done ONLY with the aid Palm Centro smart device. Then I'd like to disclaim that it has very small keys and no spell-check.

(Oh, and I should point out that it's the middle of my night and I really shouldn't be blogging and probably left out a few thoughts. Sorry)

(the #kli & #tlh in the title are twitter hashtags)

From those photos you have it looks like they used the Code2000 font. It has those horrid stick like pIqaD characters in it.

If we could get them a better font we may end up with a decent keyboard.

It also looks like they used the layout I designed on this page in the KLI Wiki: http://www.kli.org/wiki/index.php?Chatting%20in%20pIqaD

The only difference seems to be the q/Q.